Marvel’s Jessica Jones is the second superhero in the Netflix saga, which began with Daredevil a few months ago.

My greatest weakness, occasionally I give a damn. -Jessica Jones

This show is about Jessica Jones (Krysten Ritter), a girl facing the troubles of PTSD from a bad situation that is slowly but surely coming back to haunt her. She is joined by her half-sister Trish Walker (Rachael Taylor) and Luke Cage (Mike Colter; who is getting his show early next year) in her quest to rid her demons of Kilgrave (played by David Tennant). It also features some crossover with Daredevil in the character of Nurse Claire (Rosario Dawson).

Kilgrave is arguably one of the best played villains in the Marvel Universe, in one of the darkest shows/movies we’ve seen.

When you think of Marvel, you think of superheroes saving the world. From living cushy lives (Iron Man) or troubled ones in decent jobs/settings (Hulk) they don’t often focus on a girl going through a genuinely tough time.
Jessica needs to figure out right from wrong, and whether she feels like she’s in control or being commanded to just smile.

They say everyone’s born a hero. But if you let it, life will push you over the line until you are the villain. – Jessica Jones

I’m not going to go back and change Daredevil’s rating from it’s 9.5, but somehow Jessica Jones is even better. Overall it too is a 9.5 out of 10.
And I promise Kilgrave didn’t make me give it that high a rating. I’d know because I finished the series more than 12 hours ago…also, I love you. 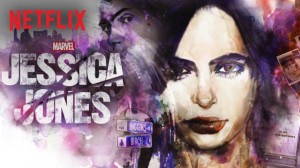