Let’s think about how America and most Americans were played and fell right into the trap of idiots.

We all remember Ahmed Mohamed, the Texas student who built an electronic device in a suitcase. 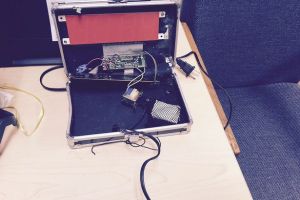 Let’s be clear: NO SANE PERSON, OR POLICE OFFICER WOULD THINK: “Hey, that looks like a clock!”
This is an unknown electronic device, being brought into a school, and the police took the appropriate response.

Then it came out that it was a clock, and the world went gaga over the kid.
Mark Zuckerberg, the founder of Facebook praised him:

Having the skill and ambition to build something cool should lead to applause, not arrest. The future belongs to people like Ahmed.

I hope the future isn’t filled with conniving people.

The President of America, Barack Obama, who five days later hasn’t acknowledged the death of an American by terrorist hands in Israel, invited Ahmed to the White House, sat him in the third row of a press conference, after sending out the following tweet:

Cool clock, Ahmed. Want to bring it to the White House? We should inspire more kids like you to like science. It's what makes America great.

And speaking of Twitter, people who request to be Verified, who have actual jobs in the world, or aren’t trying to trick the government, can’t ask Twitter for that blue check mark. It has to be hand selected and given.
Like Ahmed has on his Twitter account.

And don’t say to me: But the kid was just being a kid and did nothing wrong!

Well, the first chance of fame the kid and his family got, they picked up and moved out of the country.
And are now suing the Texas district where he went to school for $15M.

This countries back bone has grown weak in the last seven years. And with every passing day, and every line drawn in the sand, and every case that passes us by that we just sit back and let others deal with it, we grow weaker in the eyes of others.