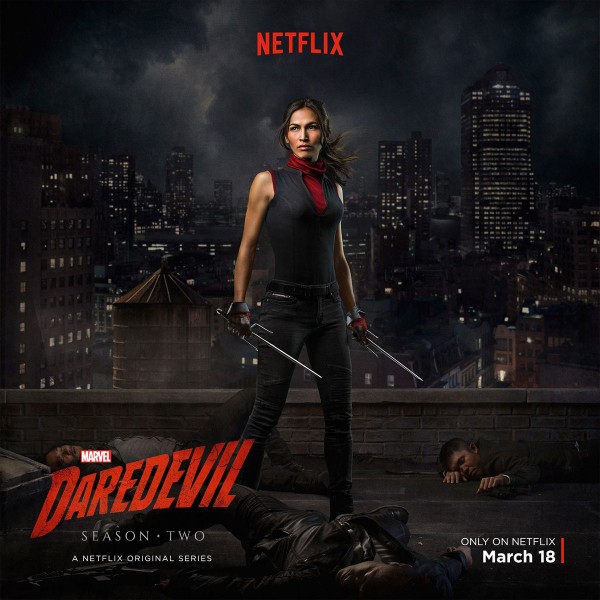 Okay, here goes another Marvel TV Show review, in which I end with a rating of 9.5 out of 10, but honestly, it’s extremely hard for Marvel to do wrong in these shows, and there is little room for improvements.

A year ago I complained that Daredevil was only given a single season. And then it was renewed. And now I’m complaining that they have yet to announce Season 3, which is now inevitable (unless it culminates in The Defenders).

Season 2 is loaded with troubles for Matt Murdock and Daredevil. A shot to the head mars his hearing…the one true strength to his powers.
And when it returns, his villains suddenly figure how to mask their heartbeats and movements.
But fear not. The Devil of Hell’s Kitchen is hard to keep down.

This season sees a host of new characters, including a villain in Frank Castle/The Punisher (played by Jon Bernthal) that we may just feel a soft side for…similar to Jessica Jones’ Kilgrave.
Also an ex of Matt’s resurfaces, in the electrifying Elektra (Elodie Yung) who threatens to hinder our masked vigilantes work.

But somehow, despite our masked star and Foggy, and Fisk, and a bunch of others from seasons one and two, the standout star this season is Karen Page (Deborah Ann Woll).
Karen, a simple legal assistant, gets dragged into a case that Nelson and Murdock are working on, so deep that even after it’s long gone she won’t be able to run from it.

One of the issues I had with Jessica Jones, was how it seemingly ignored the fact that a masked man was running around the same neighborhood. And while their isn’t much crossover this time…we do hear a name drop or two, as well as them finally mentioning Hogarth, Chao and Benowitz.

Other binge shows often seem to have trouble trying to fill the season in one shot or they take too long to pull you in (see: Will Arnett) or too long to get to the point (see: Love). At the same time the Network shows have dull(er) episodes during the season, and kick it up a notch for the desperate Sweeps ratings.

But Marvel’s Netflix shows feel no need to do any of that, as once again Daredevil brings it all to the table. Every. Single. Episode.

From the beginning of this season you feel it leading up to a glorious moment, or rather two moments, that when they finally happen (or get teased about) will leave this show (and quite frankly the whole MCU (Marvel Cinematic Universe) Netflix Series’) on the top of most peoples favorite lists.

The next show in the series will be Luke Cage, coming out on September 30th, which you can see a teaser for HERE.