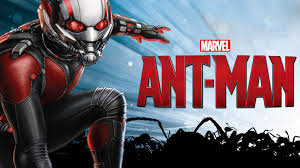 The concept is pretty cool (I know, it’s from the comics and not original, and blah blah blah) and the storyline is there, the movie itself just feels so weak…

However with the crossovers of the Avengers (Hi Anthony Mackie!) as well as the little snippet at the end credits + the new trailer for Civil War that came out last week, I’m interested to see how Ant Man plays into the new movie.

The movie focuses on burglar Scott Lang (Paul Rudd) and his stealing of a suit that turns him into a tiny creature capable of lifting 50X his weight.
After being lured into a trap, Scott has to go chase down Yellowjacket (Corey Stoll; Peter Russo on House of Cards) and stop him from turning the world into tiny evil wasps.

Overall this movie, solely on the weight of the Marvel name alone gets a 5 out of 10.
But if you aren’t into Marvel, stay far away from this one.