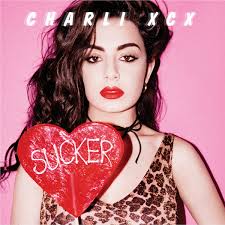 I spent the last week and a day since it came out listening to Sucker trying to figure out what made it so appealing, and stand out among some of the top albums of 2014. And it wasn’t an easy task to put a finger on what made it so good.

That is until I read the Rolling Stone article on Charli XCX, and realized what made it so good is that it’s an “artist on a plate” without being forced into following rules. Which brings me to one of my favorite songs on the album: “Break The Rules”, and if you just watch the music video, you can see her clear “non caring” for what makes things “politically correct” these days, as well as listen to one of the finer songs that came out this year (albeit I heard it too late for my Top 10 list).

The album is full of pop, rock & roll, and lots of “female attitude”, which seemed to be the theme of 2014 (I’m talking about Bang Bang).

Charli XCX (Charlotte Aitchison) may be an unknown to most people before Boom Clap hit the scene with the movie release of The Fault In Our Stars, but don’t let that fool you. She’s been writing songs for years, including the 2012 hit “I Love It” (by Icona Pop) and this years #7 on my Top Songs (full list on the 31st) “Fancy” and “Beg For It” (both by Iggy Azalea).

So, for those of you looking for the next hottest singer/songwriter, look no further than Charli XCX, she’s exploded into the market, and is more than ready to take it down.