Three shows have had their pilots in the last week that I’ve taken interest in: APB, 24: Legacy and Powerless.

Reeves Industries has the money, smarts, and technology to do whatever they want. Space exploration, drones to put out oil fires, you name it they can build it.

But when Gideon Reeves witnesses an armed robbery and calls the cops, all he gets is a “Please hold for an available operator” leading to his CFO being shot and killed.

After going to the precinct to give his statement, he realizes how old and outdated the department is, and offers the city his empty checkbook to revamp the 13th District of Chicago.
His new high-tech makes them the best-funded police district in the country. New body armor, tasers, and flying drones.

I am a little worried about this show running before it can even walk and going too big too fast.

24 is back, this time without Jack Bauer. CTU is being turned over to new hands, but before Rebecca Ingram is able to get out, her former squad, back on American soil, is being taken out one at a time, in search of Ben Khalid’s strongbox.

Squad leader Eric Carter (Corey Hawkins) and his wife barely escape with their lives and set off a chain of events to save themselves, protect the strongbox, and protect American soil from sleeper cells.

I was worried this show would lack now that Keifer Sutherland is gone, but it has done a good job at making the show enjoyable.

I’ve never been quiet saying that I like Marvel over DC….and they’ve been hinting at the “Damage Control” comedy for a while, but DC beat them to the punch…with mixed results.

Vanessa Hudgens, Christina Kirk, and Danny Pudi are just a few names that star in Powerless, the story of Charm City (neighbors to Gotham) and their constant struggle with superhero battles destroying their town.

But the powerless people of the city need protection, and Bruce Wayne’s cousin runs Wayne Security, designing products to keep the people safe.
Most of their ideas are stolen from Lexcorp, such as a single use airbag suit or a copy of an antidote.

But now Emily (Hudgens) has been hired to lead the R&D team and her top employees need to come up with fresh ideas or else they risk losing their jobs.

The pilot is a tad weak, but a decent intro to a show that might have some potential. 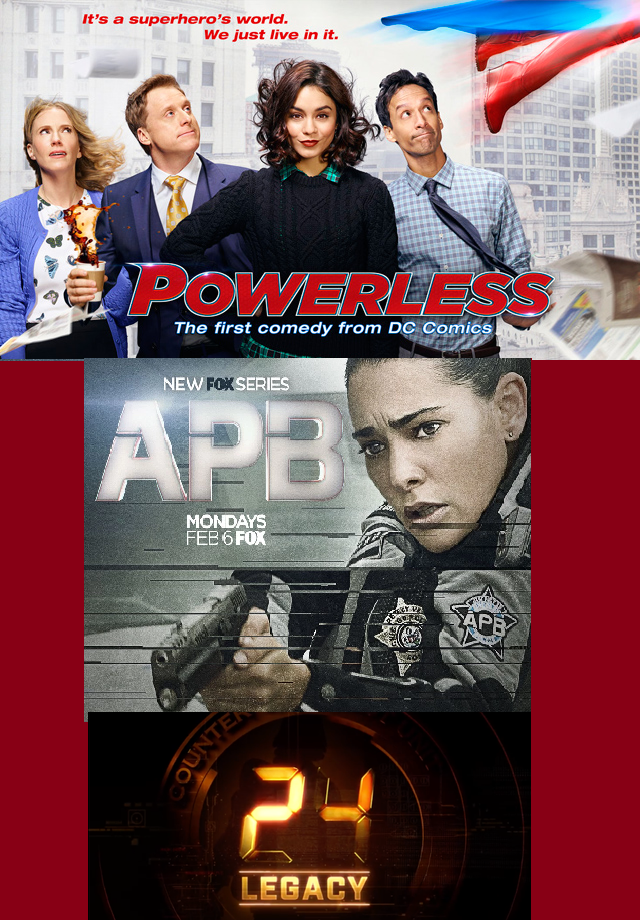