Ahead of Sunday’s home opener which I will be going to (and likely talking about next week), New York City Football Club (NYCFC) held media day at the stadium. A chance to meet some of the players, as well as the coach and sporting director.

Thanks to Fox Business I was able to tag along to the event for a preview of the team.

So out I headed to “The House That Jeter Built” in The Bronx, for an early glimpse at what’s to come…unfortunately the field was closed to the press (although some sneaky reporters did go through to see the surprisingly unfinished product).

For the first time I entered The Stadium through the press gate and got a neat little press pass. 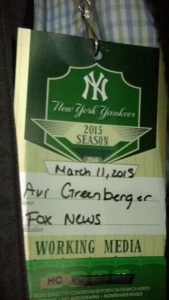 At the actual event I wasn’t able to take pictures with any of the players…but you can be sure that I took pictures OF them, as well as chatted with a few of them. The players and coach were all very down-to-earth and gearing up for Sunday’s home opener.

As we left the Stadium I was able to grab autographs from a few players on an NYCFC soccer ball that I had bought.

Here’s to hoping for a great game on Sunday!