The Mayor of NYC, Bill de Blasio, unveiled plans recently for BQX, a streetcar running through Brooklyn and Queens, in parts that have previously needed to loop through Manhattan to use mass transit between the two. 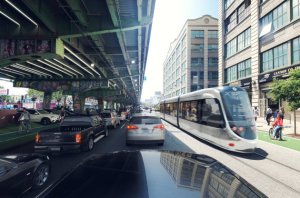 The new streetcars are supposed to run up to 12 MPH, and cut the commute time in half from the current scenarios. And the vehicles will hold almost 2X as many people as the current articulated buses.

My issue is how do we make sure they stay running smoothly, with the abundance of double parked trucks/cars, and taxis/cabs who just “pull over for a second”, and the BQX wouldn’t have the capabilities to go around it.

Early artist renditions don’t show any barriers between the streetcar and the driving lanes, and has these cars running curbside, and not through the median, so you can expect lots of loading/unloading vehicles in its way.

We’ve already experimented with bus lanes and cameras on the buses to try and enforce them, and for the most part they work…but when there’s something in the way, a bus can just go around…

The reality is, these neighborhoods are horrendously overlooked in terms of good mass transit, and this system could really help it.

For all my uncertainties with the system, one man I trust to run New York’s transportation grid correctly, Sam Schwartz (a cabbie and former NYC Traffic Commissioner), has an opinion piece in the Daily News, pro the BQX…and if he is okay with it, then so am I.
Here is the piece for your perusal.

For more info on BQX here’s a good read.