I hate to say it, but Eminem’s newest album Revival came out this morning, and he sounds older and tired. Eminem is truly one of the greatest rappers in music history, with a long list of classics from Lose Yourself and Stan, to Not Afraid and Love The Way You Lie. But his smooth vocals of past appear to be over. I didn’t see it a few weeks ago on SNL, when everyone else noticed it, but with this album, you just hear him lag through it at times.

Yet despite all that negativity and shade I am throwing his way, there’s enough on the album to make Eminem a Top 40 artist again.

His first single Walk on Water, featuring Queen Bey herself, is a great start to the album, albeit it sounds better with the ever-talented Skylar Grey singing it with him during Live performances.

And really that is the common theme of the album. The songs that he sings with others are the ones that stand out from the pack.
Whether it’s Ed Sheeran on River or Pink’s Need Me, it’s the other voices that help lift him back to the levels he once was. He also gets a nice boost from up-and-comer Khelani in Nowhere Fast.

And of course he turns to one of his favorite past times: Redoing a classic with his own touch. In the past it was Sing For The Moment, and now it’s Joan Jett’s I Love Rock & Roll that’s sampled in Remind Me.

These days Eminem is best known for ripping on Trump, and he touches on that subject, as well as other 2017 going-ons like sitting through the National Anthem in Like Home with Alicia Keys. 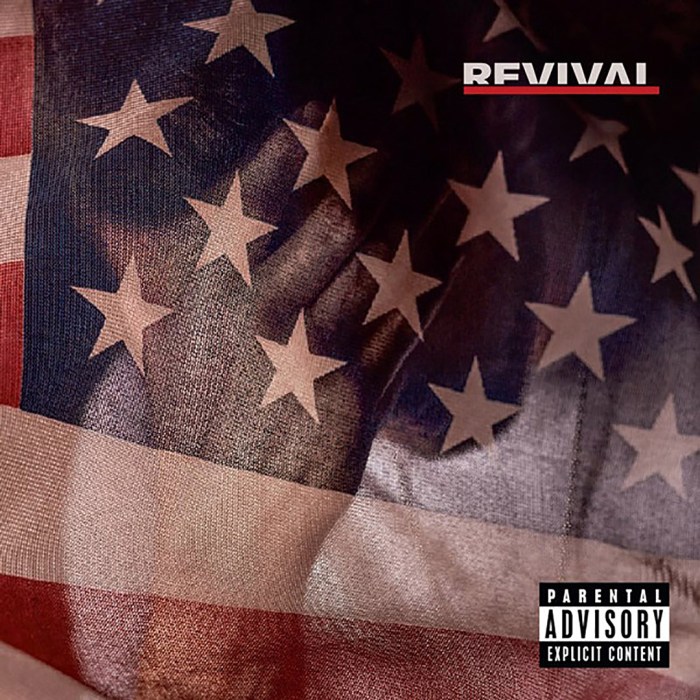 One thought on “Revival – Eminem”