This past weekend I went to Boston, staying by a college friend and her husband.

I left for Boston at 3PM on Thursday after work, prepping for a long rush hour drive.

Thanks to Google Maps though, I avoided 30 minutes of traffic on the West Side of Manhattan (approaching the George Washington Bridge area) and was off on a fairly light traffic’d trip (until the Boston area itself).
For the most part, Boston traffic was slow this weekend, due to the mass amounts of snow they’ve had, leading to less lanes on the streets.
I arrived in Boston at about 7:20PM, thanks to a bit of that aforementioned traffic as I neared Boston, and two short stops on the way.

Thursday night we went out to Cafe Eilat in Brookline, and had personal pizzas.
While I don’t know what the Kosher pizza options are in the Boston area, but the pizza there was very good, and is a recommended stop to anyone going through the area.

Friday morning I started out early, battling rush hour (+ the snowy lanes) and traveled 6 miles in 45 minutes, and started off my Boston trip at Boston Commons, on a nice 7° sunny day.
<All pictures enlarge on click>

One theme that was easily noticed around town was the Patriots Super Bowl win earlier in the week, and the parade on Wednesday. Plenty of the snow was coated in red/white/blue confetti, and statues around town had been decked out in Patriots gear.

After the Commons I went to the Massachusetts State House, arriving around 8:45/9AM, well before tour times started at 10AM, but also well before anyone actually showed up, leaving me plenty of time to walk through the building without anyone impeding me, or my pictures. 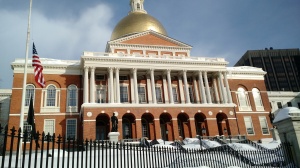 Among rooms in the building were the Senate floor and Governors office. Outside of the office was portraits of all the former holders of said offices, including Gov and Presidential Candidate Mitt Romney.

Outside the building I realized that I was finally allowed to use the General Hookers entrance, instead of the Male Hooker entrance that they usually make me use.

After that I started my trek across town, passing one of the little Fox 25 WFXT Boston studios that seemingly popped up in random places, this one directly across from the State House.

From there it was a short walk down to Old City Hall and the statue of Benjamin Franklin. 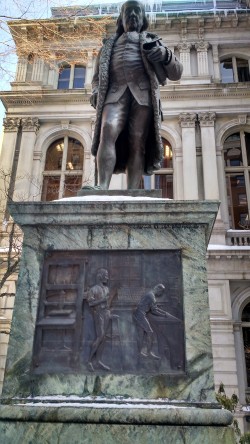 I then stumbled upon a little park/memorial set up for the Irish Potato Famine, which shouldn’t be surprising, given the large Irish community in Boston. The memorial featured some quotes as well as a statue of a family flourishing, right across from the same family starving during the famine.

More on my Boston trip in a later post, and all the pictures from the trip can be found in my Facebook album here.